Now the Royal Society of Chemistry (RSC) has uncovered a letter shedding new light on Napoleon's decision to honour the chemist, despite being locked in combat with Britain at the time. The RSC is appealing for help in discovering what happened to Davy's medal, which is missing.

The letter - dated March 14 1808, 200 years ago today - was sent by a French navy officer to Jean-Baptiste Delambre, an astronomer and general secretary of the Institut de France.

It reported the impossibility of getting through the British naval blockade to inform Davy that Napoleon wanted to give him an award for services to science. The official wrote that the Emperor's award was intended to "promote and share scientific knowledge" but the hostilities meant delivering the notification letter would have to be postponed.

Davy, who was born in Penzance, Cornwall, in 1778, eventually received word of the honour and travelled to Paris to collect his medal five years later.

In 1813, when the Napoleonic Wars were still under way, he undertook a dangerous voyage across the Channel accompanied by his wife Jane and his scientific assistant, Michael Faraday. It is presumed that the trio were arrested after stepping off a ship carrying prisoners-of-war from Plymouth to Morlaix in Brittany, according to the RSC.
They were only released when word was received approving their trip to Paris, where they met Napoleon's wife Marie Louise but not the Emperor himself.

Davy spent a total of two years travelling in Europe, in the course of which he identified iodine as an element for the first time.

The current French Ambassador to Britain was said to be "amazed" on being told about the discovery of the Delambre letter in a Paris archive and of Davy's journey to receive the medal.

RSC chief executive Dr Richard Pike said it was an "adventure story from which a mystery still hangs".
"The enlightened and advanced attitude of the French science community at that time, and the vision shown by Napoleon, is very special and should be acknowledged now, even if the thanks come 200 years after the event," he said.

"The generosity displayed by France during a bitter and protracted war is an example of the principle of international access to scientific progress.

"Two centuries to the day, science continues to cross borders to spread knowledge and learning.

"It would be wonderful if we were able to find evidence of how and when Davy finally heard of the French tribute and, of course, discovery of the Napoleon medal would add dramatically to the British scientific heritage.

"The letter and medal are missing pieces of a very intriguing puzzle."

Davy, who was knighted in 1812 and made a baronet in 1818, pioneered electrochemistry but is perhaps best known for inventing the Davy safety lamp for miners. 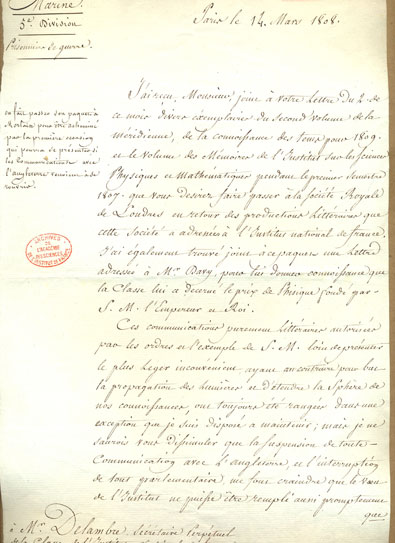