The largest representation ever created of the atomic structure of diamond will be brought to the West End on Tuesday for public exhibition.

The sculpture is one of three works of science art portraying carbon made in recent weeks by the University of Keele, and called collectively Carbon Rapture. 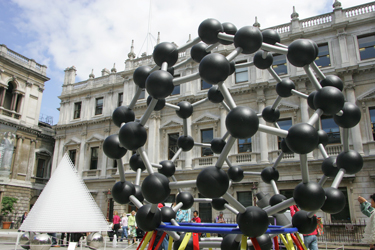 Carbon Rapture will be located in the courtyard of Burlington House, in front of the Royal Academy of Arts, and the headquarters of Royal Society of Chemistry (RSC) who commissioned the dramatic new exhibit.

"Sculpture in the courtyard in nothing new, but what makes these pieces unique is that they are the first scientific sculpture to be exhibited in this space and were created by a scientist," said Dave Garner, President of the RSC.

"Carbon has become a dirty word, with carbon dioxide now being international Public Enemy Number 1. However, we are reminding people by this remarkable exhibit that carbon is fundamental to life and it appears in many forms, some of which are beautiful. The diamond is one such manifestation. With this unique depiction of carbon the general public will be able to view at close quarters the glamorous and beneficial side of carbon. The diamond, we anticipate, will attract massive attention because of its dramatic structure."

Dr Graeme Jones, the scientist behind the project explained: "Carbon Rapture is there to engage the public in the beauty, fun and awesome power of chemistry.  It contains three pieces which represent the three iconic forms in which pure carbon exists, namely diamond, graphite and Buckminsterfullerene.

"Beauty comes in the shape of the diamond model, which is over 2.5 metres in height and is the largest model of diamond in the world.  The model contains 31,395 crystal clear balls, representing carbon atoms.

"Buckminsterfullerene, known as C60, is the celebrated football-shaped molecule. The great British chemist Professor Sir Harry Kroto, a former President of the RSC, will be posing with it on Thursday after flying from Florida where he now teaches. He discovered the molecule with two other scientists in 1985 and they won a joint Nobel Prize for their discovery, which also started the nanotechnology revolution."

"Our modern culture is happy to embrace the products of science but many do not want to engage with it as a way of thinking and researching.  Having these sculptures here restates the renaissance view that science is a cultural pursuit."

Joint sponsors of the exhibition are the Royal Society of Chemistry, The Engineering and Physical Sciences Research Council, Molymod, UK-CG, makeitmolecular.com and Keele University.

Carbon Rapture arrives in the Burlington House courtyard on 21 July and will be exhibited until the end of August.