The Royal Society of Chemistry (RSC) has persuaded a village to commemorate a family starved to death on its green in 1769, ending a 240-year silence.

Following an approach by the RSC, the village of Datchworth in Hertfordshire, 20 miles north of London, has agreed to raise a plaque recalling the lives, and the terrible deaths, of the Eaves family.

Tonight the Parochial Church Council of the village near Welwyn Garden City is expected to agree to create a monument after hearing a case made by its vicar, the Reverend Coralie McCluskey.

The bodies of James Eaves and his wife, one of their two sons and an infant daughter were discovered naked and skeletal on straw in a filthy parochial Poor House, a hovel bereft of roof and window panes.

Crawling amongst their corpses was found their surviving 11-year-old son, who descended into insanity from which he was not to recover.

The macabre episode is recalled only vaguely in the village by a ghost story there about a cart transporting their bodies up local lanes.

The RSC met the vicar last week proposing a memorial after it had located in the British Library a grim personal description and a drawing of the death scene, accompanied by a damning indictment of the officers whose neglect had led to the tragedy.

The vicar said this week: "We should have a memorial plaque in place in a few months hence, in our garden of remembrance. We will record the family names and the date of their deaths. I will also probably preach on the story one Sunday. I think that by doing this the village will be showing its respect and will also be able to lay a ghost."

She added: "In fact there is a story told here that a ghost cart containing the bodies makes its way up the lanes. Some people do believe it to be true."

The RSC took up the remarkable issue of the Eaves family when it came across the little-known story while researching the relationship between chemistry and food, its theme for 2009. 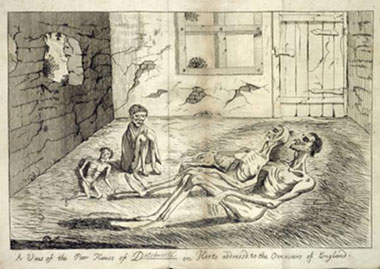 Scientist Sheena Elliott, of the RSC food campaign, said: "This is a very sobering story. The issue of hunger and starvation is often associated with the poorer regions of the world. This horrifying incident was much closer to home and not far from the capital only eight generations ago, in an age of enlightenment."

In searching for historical examples of starvation in England, the society located in the historic documents section of the British Library a pamphlet written by a former soldier called Philip Thicknesse who witnessed the cadavers of the family and who then set about demanding that the village authorities be brought to book.

Thicknesse, believed to be a friend of society artist Thomas Gainsborough, visited the scene and afterwards foiled an attempted cover-up by the village.

He later prepared, and paid for, a pamphlet, containing a drawing of the hovel death scene, hoping to jolt the Establishment into action and to bring about changes in the law, as well as to pursue the parish officers he regarded as responsible for the deaths and who tried to hush up the incident by burying the bodies clandestinely.

But those who had reportedly failed to do their parochial duties to the poor by allowing the family to go without food and water for weeks were never prosecuted.

In the pamphlet, headed 'An account of four people starved to death in Hertfordshire 1769', archives Philip Thicknesse says that it was written by himself as "one of the jurymen on the inquisition taken on the bodies, printed for the benefit of the surviving child."

The image of the five is captioned "a View of the Poor House of Datchworth in Herts addressed to the Overseers of England."

The family, he said, "perished from want of food, rayment, attendance and a habitable dwelling."

The bodies were "emaciated beyond any conception, lying on a very small quantity of dirty peas straw spread on the bare earthen floor."

They were, he reports, discovered by a shepherd boy accidentally.

The parish officers attempted to bury them before an inquest could be conducted but were thwarted by Thicknesse after he halted a cart into which the corpses had been cast and covered by straw.

He went to the rector, referred to only as Dr S_________, now known to be the Rev William Smith, of Clare College, to remind him of the consequences of the "dark transaction"

The bodies were taken to the church and the next day examined by a local surgeon brought from nearby Hatfield who commented that he "had never seen bodies so emaciated".

The mother, the account relates, had been seen crawling to the village pond for water but she was too weakened to convey the filled kettle home and that was the final sighting of any member of the family.

He wrote: "These four unhappy persons died a more miserable and cruel death than the felons who we broke on the wheel or those who are tortured to death by the Inquisition in Spain or Portugal."

He concludes that the narrative was "so shocking to humanity and so alarming in this Christian country."