The newly-appointed President-Elect of the Royal Society of Chemistry today forecast the impact of advances in modelling and computational informatics on chemistry research in the future.

Professor Dominic Tildesley, who will become president in 2014, said: "The speed and development of computers is now so rapid, and the advances in modelling and informatics are so dramatic that in 15 years' time, no chemist will be doing any experiments at the bench without trying to model them first."

Professor Tildesley is a world-leading expert in large-scale computational modelling and simulation, with a wealth of experience across both academia and industry. He is currently Director of the European Center for Atomic and Molecular Computation (CECAM) at the École Polytechnique Fédérale de Lausanne in Switzerland. He is also co-chair with Science Minister David Willetts on the Minister's UK e-Infrastructure Leadership Group.

His wide-ranging career has taken him from academic research in the US to lectureships in the UK, to senior positions in research and development at fast moving consumer goods giant Unilever, and back to academia at CECAM, where his role is to promote research into applying powerful computational methods to problems across science and technology.

Professor Tildesley said: "The field of computational modelling has been revolutionised in the past 50 years by enormous software and hardware advances that now enable us to compute material properties - for example, the optical properties of quantum dots, or the behaviour of membrane-bound proteins. It is now even possible to model what happens down to the level of making and breaking chemical bonds in an enzymatic reaction, or dislocations on a metal surface." 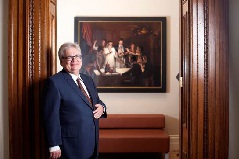 Professor Dominic Tildesley, who will become president in 2014, at the Chemistry Centre, Burlington House, London

During his time in office, Professor Tildesley hopes to apply his academic and industrial experiences to promote the importance of the chemical sciences in global industry and to work with the RSC to forge stronger collaborations between industry and academia.

He said: "I left behind 18 years of academic research and my position as Professor of Computational Chemistry to take up the role of Head of the Physical Science Group, and then Chief Scientist of the Home and Personal Care Division, at Unilever. I never regretted my move into industry.

"I had to learn more about the physical sciences, engineering, life sciences and psychology to work on developing innovative consumer products. I was using my specialised knowledge, but applying it with more breadth to projects such as modelling the decomposition of bacteria in the armpits for new deodorants, and avoiding 'crunchy' ice-cream by examining how peptides could be used to adapt its frozen structure.

"Open innovation - the sharing of knowledge, skills and infrastructure across industry and academia - is so important to our future. There are many important problems that can only be solved by chemical scientists from all sectors working together."

He continued: "I am extremely proud of the opportunity to be President of the Royal Society of Chemistry, starting with my year as President-Elect. The RSC is a leading learned society - dynamic and full of energy - that is both an outstanding publishing business and a superb vehicle for the education and advancement of chemistry. I am very much looking forward to working with the society to shape the future of the chemical sciences across all sectors, both in the UK and in emerging markets."

Chief executive of the RSC, Dr Robert Parker, said: "We are delighted to welcome Professor Tildesley as our President-Elect. He is a valued member of the RSC's Council and brings to the role a vast amount of knowledge and experience of interdisciplinary research across chemistry, materials science, life sciences and engineering in both university and industrial environments. We are looking forward to drawing on his experience and working with him on initiatives to build our community, bringing chemical scientists together from across all sectors and disciplines to share knowledge and ideas."

Professor Tildesley was announced as the RSC's newly appointed President-Elect at its annual general meeting on 10 July. At the same meeting, the RSC also announced the appointment of Professor David Grayson, former Head of the School of Chemistry at Trinity College Dublin, as Honorary Treasurer.