The final of the National Schools' Analyst Competition was held on the 22 / 23 June 2015 at Robert Gordon University (RGU) in Aberdeen. All attendees were welcomed to the Competition by the Deputy Principal Prof. John Harper. The University offers a range of successful degree programmes in Forensic and Analytical Science (BSc H), Pharmacy (MPharm) and Instrumental Analytical Science (MSc). For this year's final, Dr Graeme Kay and Prof. Andrew Morrisson from RGU, devised a programme of experiments around a pharmaceutical theme. The teams had to carry out an EDTA titration, UV/visible spectroscopy, infra-red spectroscopy and high performance liquid chromatography.

While the judging was taking place, the teams and accompanying teachers, were entertained by Prof. Donald Cairns, Head of School of Pharmacy and Life Sciences with a lecture entitled "Design, synthesis and evaluation of novel pro-drugs for the treatment of cystinosis".

The winning team of year 12 students came from Ruthin School representing the North West Region of the Analytical Division. The photo below shows the winning team comprising Xiao Ma, Caitlin Pierce and Elin Wynne accompanied by their teacher Sue Frenchman with the local organisers (Dr Graeme Kay and Prof. Andrew Morrisson) and Prof. John R. Dean (on behalf of the Royal Society of Chemistry Analytical Division). 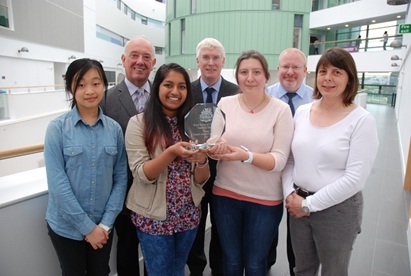 The School received a prize of £1000 together with Amazon vouchers of £50 to each of the three team members. The School was presented with an engraved glass trophy; this was the second occasion on which they have won the competition, previously in 2009 at the final in Plymouth (it must be something about the extremities of the UK!).

The runners-up were the team from Blundell's School, representing the Western Region. The school received £600 with the team members receiving £30 vouchers each. The team coming third was the Catholic High School from Chester, also from the North West Region, and they received £300 and £20 vouchers to each of the team members. The judges for this year's competition were Dr Graeme Kay, Prof. Andrew Morrisson, Dr Kerr Matthews, Dr Carlos Fernandez, Dr Catherine Inverarity and Prof. Pat Pollard (Robert Gordon University) and Prof. John R. Dean (on behalf of the Royal Society of Chemistry Analytical Division), who also chaired the judging panel and awarded the prizes.

On behalf of the Royal Society of Chemistry Analytical Division I would like to thank the University for agreeing to host the Competition and for providing an excellent venue with facilities that show case analytical chemistry. In particular, I would like to thank Dr Graeme Kay and Prof. Andrew Morrisson ably assisted by the technical team (Moira Middleton, Lauren Wilson and Stephen Williamson) and supported by student ambassadors (David Munro, Jessica Knox, John Doran, Lewis Eden and Julia Waack) from RGU, for making the whole event memorable for each of the 20 teams who attended.

The Competition is sponsored mainly by the Analytical Chemistry Trust Fund, however during the 22 heats in which 258 Schools' participated throughout the UK, many other organisations also provided financial sponsorship to support this national event. Without their help, the costs involved would be too prohibitive and some heats may not have been feasible. The final was also generously sponsored by the Aberdeen and North Scotland Local Section of the RSC.  To all of the sponsors, the Analytical Division expresses its gratitude. The regional organisers consistently receive a range of complementary comments from schools who participated, saying how much their teams enjoyed the experience. So if you would like to get involved please contact your local Analytical Division Committee to find out more about where the heats are held in your region.

I would like to thank all the Analytical Division Regions for participating in this year’s competition in this flagship event of the Royal Society of Chemistry. Also, without the agreement of the Universities to allow us to use their premises, the enthusiasm of the staff, both academic and technical, to develop and validate experiments and the additional help provided by the administrative staff in these Universities, the Competition would not exist.

Thank you to all the 258 schools' who have participated this year, the 774 year 12 students for their enthusiasm in actively engaging in analytical chemistry, and the teachers who have supported their students in attending the competition, I hope that some of the year 12 students who participated in the competition, either during the heats and possibly the final, will have been enthused by their experiences to go on to study Chemistry at University, and maybe choose Analytical Science as a career.

Finally, heats of the competition start again in early 2016 through each of the Analytical Division Regions and will culminate in the final which will be held at Keele University on the 20 / 21 June 2016.