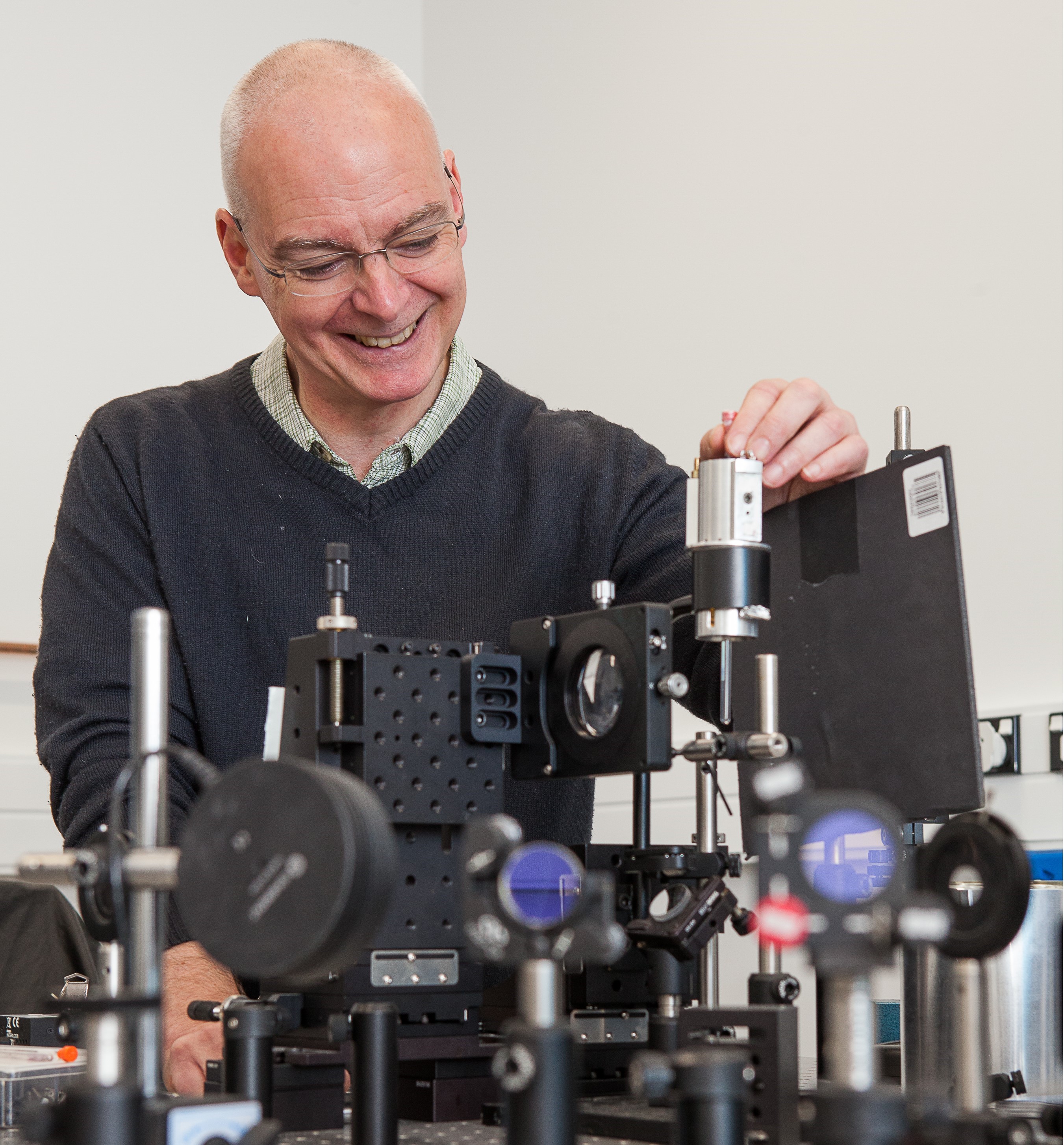 Keith Gordon received his BSc Hons (I) in 1986 and PhD in 1989 in chemistry from Queens University, Belfast, UK.  His PhD research, under the direction of Professor John J McGarvey, focused on laser spectroscopy of solar energy compounds.  He was awarded a Director’s Fellowship at Los Alamos National Laboratories, USA, and worked with Professor W H Woodruff from 1989 – 1992 on ultrafast laser spectroscopy of biological systems and solar energy materials.   In 1993 Keith took up a lecturing post in the Chemistry Department at the University of Otago, Dunedin, New Zealand, becoming Professor in 2009 in that department; he is currently Head of the Deaprtment.  Keith was President of the New Zealand Institute of Chemistry in 2006 and is a founding Principal Investigator in the MacDiarmid Institute for Advanced Materials and Nanotechnology and the Dodd-Walls Centre for photonic and quantum technologies.  Keith is a Fellow of the Royal Society of New Zealand, the Royal Society of Chemistry and the New Zealand Institute of Chemistry.  Keith’s research interests focus on the understanding the properties of conducting polymers, nanostructured electromaterials, such as found in dye-sensitised solar cells, dairy products and pharmaceuticals using spectroscopy and computational chemistry.

It was an honour and a real pleasure to be awarded the 2019 Royal Society of Chemistry Australasian lectureship.  It gave me a great opportunity to visit a lot of campuses in New Zealand and Australia and catch up with old colleagues and meet new colleagues.  I found out about the award mid-year and unfortunately due to teaching commitments had to wait until almost October before starting the tour.  I managed to pack in 15 different sites and had a great time at each of them.

I started the tour by going to the North Island in New Zealand.  I spoke at Auckland on Monday September 30th in the evening to the New Zealand Institute of Chemistry (NZIC) after having had a quick look around the impressive Auckland Chemistry facilities.  I had some lively questioning after the talk and a very nice meal with members of the Auckland branch of the NZIC.  I would like to thank the organisers – particularly Bob Andersen who organised everything very well.  The next morning (October 1) I drove to Hamilton to deliver my seminar just after lunch.   Graham Saunders gave me a nice tour of the facilities and there was a good turn out of students at the talk which appeared to go down quite well.  I also had a chat about low frequency Raman with Vic Arcus after the seminar and I hope we will get some interesting science going from that.  On the Thursday (October 3) I spoke at Massey.  It was great to catch up with Simon Hall (an old collaborator) and other Otago alumni such as Mark Waterland and Paul Plieger.  After the seminar I had a long chat with some Food Technology guys about the possibilities of using vibrational spectroscopy in their research – and that was a great opportunity for dialogue.  On the Friday I went down to Wellington and spoke at Victoria University.  This was organised by Nate Davis and I had a good chat with some of his students and those of Justin Hodgkiss.  As a member of the MacDiarmid Institute it was nice to be able to showcase some of the work made possible by the funding and collaborative interactions that have come from being part of MacDiarmid.  After a get together in Milk and Honey (a local on-campus café) I may have imbibed in a few quiet drinks with some of Justin’s group for a very pleasant evening chatting about science.

After this initial tour I really started to appreciate how great an opportunity this was to visit and see a lot of campuses in a way you might not if attending a conference at them.  It was actually very valuable to discuss how different places teach, who they organise research funding and research effort and of course seeing the cool science they all do.

The next tour kicked off with the seminar in Christchurch (Friday November1) where I got to see the nice new facilities that have been built for Chemistry.  I also got a good chance to catch up with some of the guys in engineering who are working on battery technology.   On the Saturday I went to Brisbane and gave two talks on the Monday.  This was extremely accommodating of both University of Queensland and QUT and I am grateful to Philip Sharpe and Anja Goldmann for making this possible.  At UQ I had a great chat with Elizabeth Krenske about DFT and then was able to see around Paul Burn’s fantastic facilities.  I also was able to see the ultrafast laser lab run by Evan Moore.  Later in the day I got a chance to talk to Anja and her team about the research at QUT.

The next day I spoke at Charles Darwin University in Darwin hosted by Vinuthaa Murthy.  This was smaller venue but I got to meet some wonderful high school teachers at dinner.  I then took a few days off and reconvened with a talk at the University of South Australia in Adelaide (Monday November 11).  Jonathon George hosted my visit and I had a wonderful discussion with him about his very ingenious organic synthetic chemistry.  I also had a few beers after the talk with a number of the staff to chat about science and how departments run.  I also had the chance to see Tak W Kee’s rather ingenious 2D electronic spectroscopy system which uses optical flats to reduce errors due to optical dispersion.  I just read a very nice paper describing its operation in J Phys Chem A (2020) 124, 1053.

I then went to Melbourne and gave seminars at Monash and University of Melbourne.  At Monash (November 14) I was able to catch up with Alan Bond – who coordinated a lot of the meetings in Australia for which I am very grateful.  As well as meeting Alan and many of the other staff I also chatted with Doug MacFarlane about his electrocatalysis work.  A lovely visit and we also had a delightful meal at Alan’s favourite restaurant which was brilliant.  Finally on this leg I visited University of Melbourne (November 15) and talked with Ken Ghiggino, Trevor Smith, James Hutchinson and Paul Mulvaney among others.  I would like to the thank James for hosting me, and Paul and his team for the after seminar function (funded by Exciton Science).  It was really good fun to see so many home-built laser-based experiments.

In December I was invited to the Inorganic meeting IC19 at Wollongong; this was a great meeting and it gave me a chance to catch a few venues for the lectureship.  On the Thursday before the conference I went to UNSW (December 12) and talked there and caught up with David Black and Albert Fahrenbach (who worked for Amar Flood in Indiana, Amar did his PhD with me at Otago).  On the following Wednesday (December 18) I talked at Macquarie and had great discussions with Fei Liu and her colleagues.

The final leg of the tour was to Perth.  I spoke at Curtin and UWA (February 13 and 14 respectively).  It was great to chat with Max Massi and Paul Low among others and also interesting to see how their buildings (which are relatively new < 15 years old) were operating.

My final talk in the lectureship will be given in March at Otago.

In summing up I would like to thank all of the people who took the time to chat with me during these visits – some were organised at pretty awkward times and yet the turn out to the seminars was great as was the enthusiasm of the people I met.  I actually felt quite positive about chemical sciences in Australia and New Zealand after the tour as I saw such diversity in the science that was being conducted but also the organisation of the departments.  So a huge thanks to the Royal Society of Chemistry, RACI and the NZIC for supporting this speaking tour.

From ultrafast processes in solar cells to prediction of meat quality: using spectroscopy and computational methods to understand complex systems.

Vibrational spectroscopy is a potent method of analysing molecular structure within small volumes and at fast timescales.  In this presentation I will try to cover off three related but distinct areas of interest.

Firstly, I will discuss how using a suite of spectroscopic methods, and by studying a series of complexes (metal-based donor-acceptor systems) in which parameters are carefully controlled,1 it is possible to develop design principles for excited state properties such that one can enhance electronic absorption and increase excited state lifetimes.2 Useful properties in both solar cells3 and photocatalysis.  The understanding of how these properties, both ground and excited state, are modulated by driving force and effective conjugation is not straightforward.

Secondly, the use of computational chemistry in modelling properties of compounds has become ubiquitous in modern chemistry.  However these do not always predict molecular behaviour effectively and unpicking the extent of deviation between theory and experiment reveals some interesting problems in our reliance on computational methods.4 Our studies on the spectroscopy of donor-acceptor and π, π* systems highlight these issues.5

Finally, our experimental development, originally aimed at understanding ground and excited state properties of metal complexes and other donor-acceptor systems, has provided us with tools that are amenable to analytical spectroscopy.  We have used these tools in the study of primary produce and pharmaceuticals.  More recently we have used low-frequency Raman spectroscopy6 to evaluate crystallinity (and order in general) in structures as varied as solar cell polymers7 to active pharmaceutical ingredients.8 Our studies in these areas will also be described.

See the events on the database