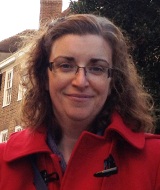 My name is Anita Klute and I have a PhD in Analytical Chemistry and I’ve been a member of The Royal Society of Chemistry since I was an undergraduate.

I studied Chemistry with Medicinal Chemistry at Glasgow University. After completing my BSc, I did an MSc in Pharmaceutical Analysis at Strathclyde University, followed by a PhD (which was funded by the RSC) at Sunderland University, where I specialized in chiral separations using LC, CE and CEC.

After my PhD, I started working at Pfizer in Sandwich in Pharmaceutical Development. I worked at Pfizer for nearly 13 years as an Analytical Team Manager and during my time at the company I developed experience in the drug development strategies for APIs and numerous formulations. I have particular expertise in the early stages of drug development.

In 2012 I moved to Gothenburg in Sweden where I now work for AstraZeneca in Mölndal. I am a Team Manager and I have led teams in inhalation development and I am currently managing a multidisciplinary team developing new medicines at the early stages of development.

Since leaving the UK, I have missed the networking that local RSC sections offered, so I am keen to establish a network of RSC members in Sweden.

In December 2016 I joined the instrument scientist team at the small-angle neutron diffractometer, KWS-2, which is based at the Jülich Centre for Neutron Science (JCNS) in Garching, Germany. Previously, I completed my undergraduate degree at the University of Newcastle, U.K. In 2016, I completed my PhD in physical chemistry under the supervision of Dr Rachel C. Evans at Trinity College Dublin (TCD), University of Dublin, Ireland. My research is focused on understanding and designing systems, which self-assembled into functional materials based on conjugated polyelectrolytes and surfactants.

As a RSC representative, I would like to develop a research network between RSC members. If you have any questions or suggestions, please do not hesitate to contact me.

The RSC promotes the chemical sciences and supports members worldwide