Formula for the perfect cheese on toast revealed

The Royal Society of Chemistry, together with the British Cheese Board, has today announced the formula for making the perfect slice of cheese on toast.

Following a series of scientific tests on the grilling conditions, performed by the society's Science Executive, Ruth Neale, the society and the Cheese Board concluded that the ultimate cheese on toast can be made using the following formula:

(Click on the image to see a larger view) 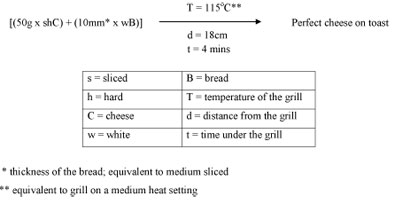 Ruth, a chemist, said: "As the result of tests we carried out in our Chemistry Centre kitchen, we found that the perfect slice can be made by melting 50 grams of sliced hard cheese, such as cheddar, on a slice of white bread, 10mm thick, under the grill. The cheese on toast should sit at a distance of 18cm from the heat source - which in our grill was at a temperature of 115oC - and needs to cook for four minutes to achieve the perfect consistency and taste.

"To determine our formula we carried out a series of tests on the grilling conditions, changing just one variable at a time - just as a scientist would carry out tests in the lab. To measure what makes the 'perfect' cheese on toast we looked at three different components - the consistency of the temperature of the melted cheese across the slice, the texture of the cheese, and the taste."

Ruth worked with cheese expert Nigel White, Secretary of the British Cheese Board, to judge the cheese on toast experiments for texture and flavour.

Ruth continued: "Our first test looked at the distance of the cheese on toast from the grill. We found that the cheese on toast that was grilled furthest from heat source melted the most consistently, and came out best in the texture and taste tests.

"Lastly, we looked at whether sliced, grated or cubed cheese melted best, using the same conditions we had determined previously - so, four minutes cooking time at a distance of 18cm from the grill - and sliced cheese came out on top."

Using these scientifically-determined cooking conditions, Nigel White carried out a further two tests to determine the best type of cheese and bread to use, and together he and Ruth devised the formula for the perfect snack.

Ruth concluded: "Although cheese on toast itself might not be thought of as the most scientific of topics, we hope that the tests we carried out to determine our formula demonstrates the approach scientists take to designing experiments for their research.

"And of course, chemistry has a very important role to play in the making of cheese. Many different chemical techniques are employed in cheese-making processes that result in the huge number of different cheeses available - over 700 in the UK alone!"