Background - Why is this important?

Our ability to rapidly, cheaply and accurately read the complete DNA coding region of individuals is arguably one of the grandest current challenges for the life sciences. Such technology would herald a new and exciting era of truly personalised medicine where individual disease susceptibility and response to treatment could be monitored in real time.

How such knowledge will be managed and used is an ongoing and important ethical debate; however, for the individual patient, the opportunity to better understand disease, apply the most appropriate existing therapies or to discover new ones provides real hope.

What did the organic chemists do?

Progress in genome sequencing is underpinned by extensive and concerted application of powerful technologies from many scientific disciplines including genetics, molecular biology, engineering, and chemistry.

The enzyme is tethered to the bottom of micro-plate wells. DNA fragments are loaded into the wells, which are then washed with the uniquely labelled DNA bases. A digital camera records the sequence that these labelled bases are incorporated into the growing DNA strand by the DNA polymerase. The phosphodiester bond formation catalyzed by DNA polymerase results in release of the fluorophore from the incorporated nucleotide generating natural, unmodified DNA and a unique fluorescence identifier. The sequence of light emissions can be decoded to identify the structure of the growing strand.1 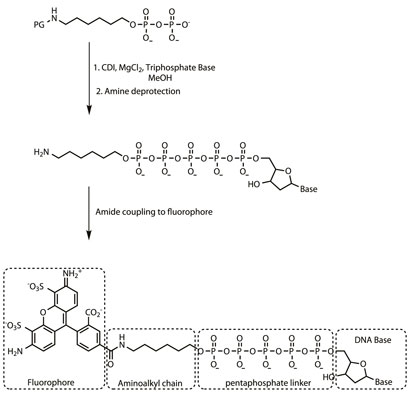 Each nucleotide base component has a unique fluorophore linked through an aminoalkyl chain to the terminal phosphate of a pentaphosphate linker moiety. This long linker has been shown to increase the efficiency of incorporation into the growing DNA strand. Successful implementation of the technology required the development of an efficient synthetic chemistry method for fluorophore incorporation which would be applicable to all 4 nucleotide bases.2 The synthetic route applies the well known carbonyldiimidazole (CDI) coupling reagent, which was discovered in the 1960's, to form the phosphoester linkers;3 the second coupling applies a novel variation using MgCl24 to increase the coupling efficiency.

Nucleotide interaction with these sequences triggers a detectable current modulation across the nanopore. As the stand passes over the nanopore, individual bases on a single DNA strand can, in principle, be identified. This is a powerful exemplification of molecular recognition linked to analytical detection. This impressive recognition technology is equally applicable to the detection of small molecules or proteins.7,8

What is the impact?

The scientific community has thrown its weight behind the human genome sequencing challenge and progress has been dramatic. The first “human genome” sequence cost over $1 billion and was an assembly of DNA sequences taken from several volunteers. In recent years there has been significant progress in reducing the cost, according to the National Genome Research Institute the cost per genome is currently $7,666.

The impact of many scientific disciplines including genetics, molecular biology, engineering, and chemistry has already impacted upon our ability to sequence individual genomes and the implementation of the methods described here, as well as others, will herald a new era of truly personalised medicine where individual disease susceptibility and response to treatment can be monitored in real time.

With the relentless rise of DNA nanotechnology’s popularity, Emma Davies explores the role chemistry has played in its success

Molecular information is vital for personalised medicine. Chemistry plays an important role in developing ways to obtain this information faster and more efficiently.

The first draft sequence of the human genome, announced 10 years ago, was time-consuming and expensive

Sequencing in the fast lane

Advances in DNA sequencing technology are changing the way scientists look at genomes. Phillip Broadwith gets up to speed with the latest developments

Jeff Hrkach talks about how he got into polymer chemistry