Life on earth probably began in the depths of the ocean and not on the planet's surface, claim scientists.

The research is reported in the latest edition of the Royal Society of Chemistry journal Chemical Society Reviews.

The claim comes from Dr Isabelle Daniel at the University of Lyon and colleagues in Germany and France who have surveyed the current knowledge on the origins of life of Earth.

They conclude that when life on Earth began, about four billion years ago, conditions on the surface would have been unfavourable for life to emerge.

Dr Daniel said: "Only a few modern species can live in the kind of extreme environment that was present on the primitive Earth's surface."

Volcanic eruptions and meteorite impacts created an erratic climate above ground, but volcanic activity regulated the temperature at the bottom of the ocean at a more favourable 20-50 degrees Celsius.

Dr Daniel said: "Harmful radiation would have been filtered out by the ocean and the high pressure conditions of the ocean could have stabilised essential biological molecules such as DNA and RNA." 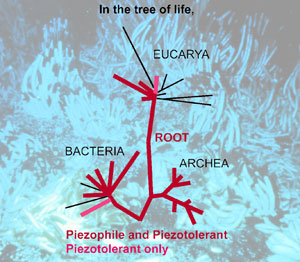 The scientists refer to evidence that most surface organisms can withstand pressures higher than they are used to without consequence to their life cycle or metabolism.

Dr Daniel said: "This may represent one of the most ancestral physical conditions under which life had to emerge.

"In fact, we believe that the last universal common ancestor to all living organisms was a piezophile, an organism that prefers to live at high pressures."

If life did emerge at the bottom of the ocean, it is possible it could have begun under similar conditions on other celestial bodies, such as in the deep oceans of Jupiter's moon Europa.

But Dr Daniel is sceptical about whether the team's hypothesis can ever be confirmed.

She said: "Life has erased most traces of its origins, and reinventing life itself would simply take too much time and good fortune."

with thanks to Elinor Richards for the original article.

Deep thinking about the origins of life

Life on Earth probably began in the depths of the ocean and not on the planet's surface, claim European scientists.