A sensor which can rapidly detect the chemical nerve agent sarin has been developed.

The research is reported in the latest edition of the Royal Society of Chemistry journal Chemical Communications.

Sarin attacks the nervous system of humans and was used in the Tokyo subway terrorist attacks in 1995.

The poison - which is a liquid at room temperature - evaporates quickly to give a colourless, odourless, and deadly gas.

Professor Eric Anslyn and a team at the University of Texas have designed a molecule which reacts with a sarin surrogate - a chemically similar but safer proxy for sarin - in mere milliseconds.

Professor Anslyn said: "In today's political climate, the threat of terrorist activity is ever more prevalent - and the detection of chemical nerve agents is imperative.

"The sensor is able to give a fluorescent signal very rapidly, upon the detection of chemical nerve agents." 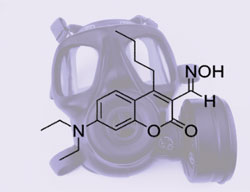 The new technique is much faster than other previous methods for detecting chemical warfare agents - which involve a slow reaction between the agent and an alcohol.

Professor Anslyn said: "The detection system used by the new sensor is much faster, with a reaction half life of 50 milliseconds."

The sensor is based on the dye molecule coumarin - which begins to fluoresce when reacted with the nerve agent.

Professor Anslyn and his team are now working on developing solid support materials to attach the sensor to, so that a device which can be used in the field can be produced.

with thanks to Alison Stoddart for the original article