The RSC has discovered a handwritten letter by Winston Churchill, sent to the widow of Edward Harrison, a chemist who invented the gas mask during the First World War.

The SBR (small box respirator) saved hundreds of thousands of lives but cost Harrison his own life. Between now and the 90th anniversary of the end of the war the RSC will place on its website images relating the Harrison and the gas mask project, to celebrate this great chemist's important but often forgotten contribution to the war.

Harrison worked himself to death heading the team which designed and perfected the mask to protect against poison gas attacks by German forces. He had been brought to England from France where he has enlisted at the age of 47, having lied about his age (45 was the maximum age to serve).

He and fellow chemists underwent self-imposed trials sealed rooms full of gas to test the mask. The exposure to poisons and relentless labours in evenings and weekends took its toll on him and three years after producing the celebrated box respirator he died at the age of 49.

Upon his death Churchill as minister of munitions wrote a letter to his widow which offered admiration, condolences and the revelation that he had only just decided to promote him Brigadier-general in charge of all chemical warfare. The RSC unearthed the Churchill letter in a box in the vaults of the Imperial War Museum, which was given medal, photographs and other materials by Toby Harrison, Harrison's grandson, recently. 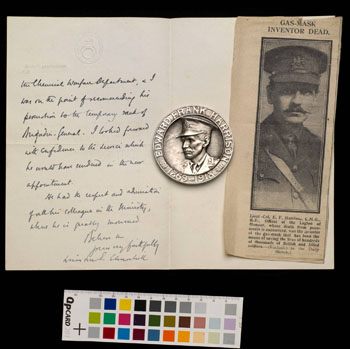