The Royal Society of Chemistry is inviting the public to devise a successful ending to the greatest-ever cinema cliff-hanger to mark the 40th birthday next year of The Italian Job made in 1969.

The promotion will also celebrate the creation 100 years earlier, in 1869, of the great Periodic Table of Elements which includes element number 79, Au (gold).

The RSC wants to know how the heist team who pulled The Italian Job might have managed to save their lives and rescue stacks of gold bars in a bus see-sawing precariously on the edge of an Italian mountain.

The competition prize, a three-night stay for two in Turin, scene of the robbery, will be provided in spring 2009, coinciding with the fortieth anniversary of the making of the heist film which starred Michael Caine.

The challenge is being staged to draw attention to gold - much in demand recently - and the other 116 elements in the celebrated, and vitally important, Periodic Table of Elements, first composed by the great Russian chemistry professor Dmitri Mendeleyev.

In the film, which has over the years gained cult status, crook Charlie Croker (Michael Caine), optimistically declares in the last line, from the floor of the tipping bus: "Hang on lads - I've got an idea!"

The Royal Society of Chemistry is asking the public to offer explanations of how Croker and his team might have succeeded in unloading the gold bars from the far end of the bus without losing their own lives in the process.

The RSC stresses that it in running the competition it does not condone the fictional bullion heist and regards the competition only as a scientific and logical challenge.

Chief executive of the RSC, Richard Pike, said today: "Over the four decades since the film was released it has become the most popular robbery movie produced, with an ending that left the audience literally in a state of memorable suspense. It would be a challenging exercise in logical thinking to see if the situation could have been saved. We see this as a call for clear and creative scientific and engineering thought under pressure.

"We will never know if Charlie Croker came up with the answer to his own team's dilemma but we can at least try to work out how the potentially fatal task might have been managed in the desperate conditions."

The RSC will announce the winner of the competition, and publish the entries, on 8 January 2009. Deadline for entries, which should include diagrams and full details, is 1 January 2009.

Submission can be made by email to Jon Edwards or by hard mail to "Cliffhanger solution", Royal Society of Chemistry, Burlington House, Piccadilly, London W1J OBA

Solutions should be based upon the schematic below: 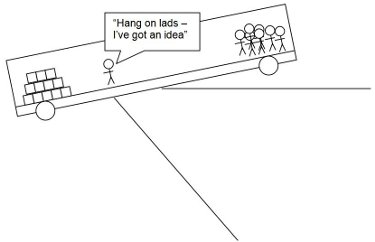 The name is the Anglo-Saxon word for the metal and the symbol comes from the Latin 'aurum', gold