The lack of women in science is highlighted today with men making up 42 of the 44 Royal Society Fellows, said the Royal Society of Chemistry's incoming President.

Professor Lesley Yellowlees, who becomes RSC President in July, said she was "saddened, but not surprised" that virtually all the new Fellows were men.

"Let me begin by congratulating all the new Royal Society Fellows on receiving this honour," Professor Yellowlees commented. "I don't want to take anything away from their hard-won achievements.

"I have to say though that I'm saddened, but not surprised, at the lack of women present at the top of science. Where are the female Royal Society Fellows? When you have a situation where more than 95% of new Fellows are men, you know you have a problem when it comes to women in science. In both 2010 and 2011, five women in 44 became fellows and now it is down to two this year.

"Although virtual parity occurs at school and university, with a near 50/50 male/female ratio in number of chemistry students, there is a big issue over women in senior academic ranks - and today's announcement simply highlights that. Of the nine chemists who today became FRS, all of them are men. 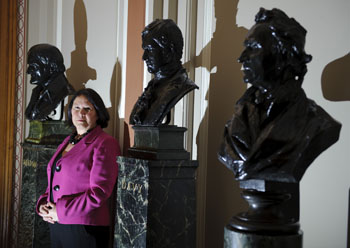 Professor Yellowlees standing between busts of John Dalton and Humphrey Davy at the Royal Society of Chemistry's office in Burlington House, Piccadilly

"We need to put into place measures now, to make it more attractive and realistic for women to stay on in science, so that in the years to come you won't simply need one hand to count the number of women Fellows of the Royal Society."

Professor Yellowlees was today discussing women in science at a symposia hosted by The University of Edinburgh, where she is Vice Principal. "We have had some wonderful discussions today about many of the issues involving women in science. There have been inspiring talks by people from a cross-section of industry and academia and we will find the solutions we are looking for," she said.

Professor Yellowlees recently contributed to the Royal Society of Edinburgh Tapping all our Talents: women in science, technology, engineering and maths (STEM) report which concluded that "expensively trained women are lost in larger proportions than men at every step of the postgraduate ladder and are under-represented in top positions across the spectrum of business, public service and academia."

Although Professor Yellowlees, who is the first female RSC President in its 171-year history, said she will use her two-year term as RSC President to promote women in STEM issues, she believes diversity in the 21st century is much more than about simple gender issues.

"Diversity these days also means taking into account what areas of chemistry women are representing and that has also changed significantly in recent years."

Tapping all our Talents: Women in science, technology, engineering and mathematics - a strategy for Scotland
The report recommends creating a strategy to increase the proportion of women in the workplace qualified in STEM subjects, and to increase the number who rise to senior positions in universities, research institutes, government, business and industry.