The Royal Society of Chemistry has awarded a National Chemical Landmark blue plaque to the University of Southampton's Chemistry department, celebrating the 40th anniversary of the discovery of a ground-breaking and hugely important technique.

Surface Enhanced Raman Spectroscopy or SERS  is used for detecting tiny quantities of molecules, in situations from crime scene forensic analysis, to drug detection, to establishing the origins of works of art.

On awarding the discovery of SERS with a National Chemical Landmark blue plaque, Professor David Phillips, Royal Society of Chemistry Past President says: "I am immensely proud that my former departmental colleagues at the University of Southampton were responsible for discovering SERS, particularly since I was a member of staff in the Department when the discovery was made.

"The practical application of SERS in chemistry, genetics and healthcare is of vital scientific importance, from the detection of cancer genes to DNA fingerprinting. It is my great pleasure to come back to Southampton on behalf of the Royal Society of Chemistry and to present a prestigious Chemical Landmark."

The discovery was made in the 1970s by Professors Martin Fleischmann, Patrick Hendra and Jim McQuillan, at the University of Southampton. The team found that by roughening the metal surface upon which they were looking at molecules, they could increase the signal by which they could detect these molecules, by a million times. This allowed them to detect molecules in far smaller quantities than ever before.

Since this discovery, there have been thousands of papers published on the technique, known as Surface Enhanced Raman Spectroscopy, or SERS, as well as countless uses of it across industries and across the world.  An example of where it is used is in forensic analysis, to pick up the tiniest trace molecules of DNA at crime scenes.

Professor Patrick Hendra, who made the discovery in the 1970s says; "SERS is arguably the most sensitive method of analysis on surfaces that anyone has ever come up with. However, at the time we had no idea how important it would become beyond the academic world, or the vast range of applications that would be developed." 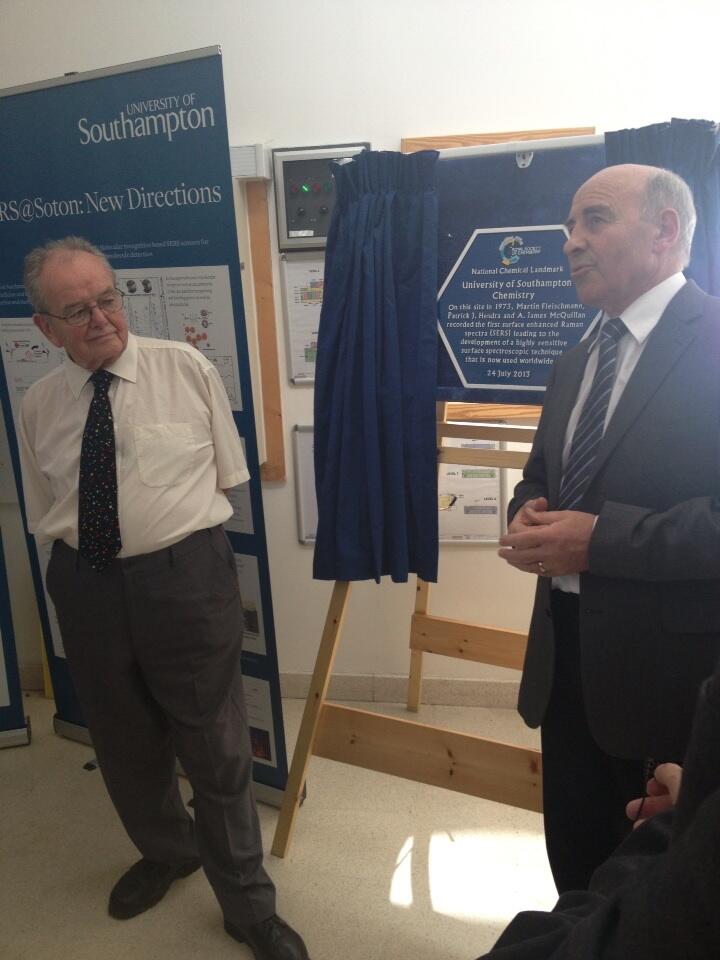 In 2013, Dr Sumeet Mahajan, Senior Lecturer in Life Science Interface at the University of Southampton is taking SERS to the next level, using the technique to advance stem cell therapy. Dr Mahajan says: "Stem cells could hold the key to tackling many diseases. They develop into all the various kinds of cells needed in the body - blood, nerves and organs, but it is almost impossible to tell them apart, even with the most advanced microscopes, without complex techniques.

"Up to now, scientists have used intrusive fluorescent 'markers' to track each cell but this can alter or damage the cells. By using SERS, we can use very tiny particles of gold, less than 1000th of the width of a human hair, as 'nanoprobes' to enter cells. Through this, we can enhance the observation of the natural vibrations of molecules within the cell and make this previously almost invisible motion, easily detectable. This makes us able to detect if drugs are reaching cells correctly, and to detect abnormalities within cells on a molecular level."

Southampton University media centre
As a University community we will change the world for the better through our research, education, innovation and enterprise.