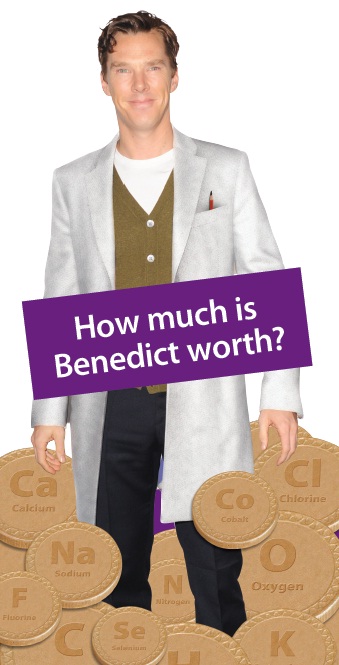 As this year's Cambridge Science Festival theme is health, the RSC team wanted to find a way for you to learn all about what you're really made of. So, to celebrate the involvement of this year's guest director, as part of the festival's big Science on Saturday, we're asking "How much is Benedict worth?" And, you'll be glad to know, the answer is elementary, my dear Watson.

Head along to Science on Saturday and look out for a large-as-life version of one of our favourite actors, learn about the ingredients you'll find in the human body and guess how much his elements are worth to win a rather cool prize*.

Apart from swooning over Benedict, the Royal Society of Chemistry team is playing a full part in supporting the exciting programme for the Cambridge Science Festival 2013, which starts this week and goes on, slightly longer than a week, until 24 March.

There are loads of volunteers from the RSC taking part on the big day, so they'll be asking you to get your hands dirty, don your goggles and discover how chemistry keeps you healthy by getting involved in some fun and fascinating experiments.

Other highlights around the festival in Science on Saturday include BBC presenter and author Simon Mayo talking about his excellent Itch books, a show and tell from comedian and science fan Robin Ince, not to mention modern alchemist Peter Wothers recreating some of his explosive highlights from the recent RI Christmas Lectures.

See below for links to the Cambridge Science Festival, on how to enter your guess as to how much Benedict's elements add up to and what you can win...

*Find out how to enter your guess on how much Benedict is worth!
Link to thereaction.net includes more information on the prize...