The Royal Society of Chemistry's president, Professor Lesley Yellowlees, came together with the presidents of the Institute of Physics and the Society of Biology today to celebrate the first time in history that all three leading scientific societies have been led by women.

Professor Yellowlees joined Dr Frances Saunders, President of the Institute of Physics, and Dame Nancy Rothwell, President of the Society of Biology, to take part in a question and answer session with A-level students, undergraduates and early career researchers at the Museum of Science and Industry in Manchester. The event was chaired by Baroness Verma, Parliamentary Under Secretary of State at the Department of Energy and Climate Change. 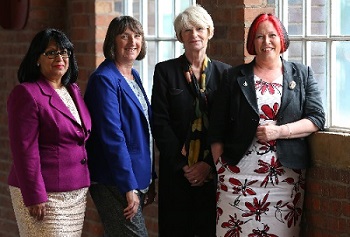 Ahead of the event, the three presidents appeared on BBC Breakfast to talk about their experiences of making it to the top in science.

The three presidents also issued a joint statement on their aspiration to see 'absolute equality' for all in science:

"This is a moment to celebrate progress, but crucially to encourage today's young scientists to push very hard to make the future genuinely equal. For an area like science where the challenges and opportunities are huge, what is needed is real diversity among scientists and absolute equality of opportunity for all to become scientists.

"At school, girls outperform boys in all three sciences at GCSE. However, girls are outnumbered five to one in A-level physics classes and, while more girls than boys study chemistry and biology at A-level, if you survey along the career ladder women progressively disappear from view. Across the UK many young women do not believe a career in science-based roles is available to them.

"We must consider that the lost opportunities here are not just for women, they are for science. We know that science has become extremely important across all sectors of the UK economy with 20 per cent of the UK's workforce employed in science-based roles. The number is expected to rise to 7.1 million by 2030. There is a national shortage of skilled STEM workers each year, 40,000 at the most recent estimate, and we need talented women to fill these gaps.

"We need a genuine change of perspective. Science has in the past been seen as a man's world, but this must not be perpetuated. Science is both revolutionary and progressive and just as it has to be open to all ideas it should be open to all people - Government and the scientific community must work together to provide the support needed to allow women to reach the top in science. Most importantly, we need to send a message to all young people with ambition to become scientists: they must believe in themselves and push for progress - the rewards are many."

The Rt Hon Jenny Willott MP, the Equalities Minister, sent a message of support ahead of the event. She said: "The STEM disciplines are stronger when they reflect the diversity of our communities and make use of all the talent in society, so I'm delighted that for the first time ever, all three Societies are being led by female Presidents. This is a remarkable historic moment.

"I hope that today's attendees, whether they are just starting to specialise in the sciences or are seasoned researchers, will leave feeling inspired and encouraged by the remarkable and varied careers of Presidents Rothwell, Saunders and Yellowlees. The Government is working hard to encourage more women to go into the STEM disciplines and we launched the Women in Technology and Engineering Call to Action last week, which I hope will inspire more women to follow in the three Presidents' footsteps, so while this is the first, it won't be the last time women head up all three societies."